Several thousand people in western France have held a 5 day meeting at Nantes, against GPII (les Grands Projets Inutiles Imposés). People came from other countries, to share their struggle against huge infrastucture projects such as the plans for a huge new airport for Nantes, at Notre Dame des Landes – a fertile farming area. They regard these large projects as unnecessary, wasteful of public funds and socially unjust, undermine local culture, and are environmentally destructive or dangerous. They also fear such huge schemes exclude people from decision making. Most of these projects take up farming land, making it less likely an area can have food sovereignty. 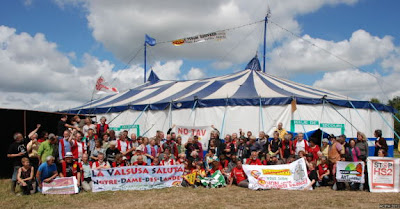 Coordination Project Opponents Airport Notre Dame-des-Landes welcomes the success of the 2nd European Forum against the Grands Projets Useless Imposed held at The Paquelais-Vigneux of Brittany, near Nantes (44) from 7 to 11 July 2012.

Over 8000 people attended the five days of workshops, discussions and conferences.

The quality of interventions and the remarkable work of interpreters and the organizing team have helped to make this forum a while extremely strong landmark in the convergence of struggles in Europe.

All participants, including foreign delegations, leave motivated and determined to continue in that direction.

The closing statement (attached) to be proposed for validation to instances of different organizations, is a valuable foundation for future exchanges at European level and beyond.

Appointment is already made ​​for the European Social Forum in Florence from 8 to 11 November 2012, a day of decentralized actions and coordinates December 8, 2012 (3rd European Day against the Major Projects and Useless Imposed), the World Social Forum in Tunis in March 2013 and the third against the GPII Forum in Stuttgart in the summer of 2013.

After Rio + 20, the defense of a world solidarity continues to Notre-Dame-des-Landes.

We, participants in the second against the Major Projects Forum Useless and Imposed (GPII) in Notre-Dame-des-Landes (France) from July 7 to 11, 2012:

We came together to identify, list, fight the big projects that we recognize unnecessary, wasteful of public funds and socially unjust and environmentally destructive or dangerous, and that exclude people from decision making. Most of these projects, devourers of farmland and natural areas, do not allow food sovereignty. They undermine cultural diversity.

This second forum brought together some forty collectives and organizations including fifteen of Europe and beyond. More than 8,000 people participated in various workshops. It was very rich exchange of perspectives and actions, sharing experiences and building alternatives to major projects and for other choices. We decided:

Our concrete struggles, their convergence are emerging today the concept of Major Projects and Useless Imposed. We want to explain and popularize this concept broadly. We leave the forum more than ever motivated and determined to pursue our goals and continue to link our struggles.
http://forum-gpii-2012-ndl.blogspot.fr/2012/07/declaration-de-cloture-du-2eme-forum.html
Adopted The Paquelais – Vigneux of Britain, July 11, 2012Website: Forum http://forumgpii2012ndl.blogspot.fr/
For more information and news about Nantes airport, see Nantes International Airport and Nantes Airport News

July 9, 2012   The airport campaigners at Nantes have produced a spectacular visual image, created by hundreds of people in a green field. Their message, in English this time, to get to a wider audience than only France, reads “Save The Planet” and “STOP!” They are opposing not only the unnecessary and highly damaging airport planned for Notre Dame des Landes, but have joined with other campaigners from other parts of Europe opposing other bits of, what they call “projets inutiles” (useless projects), which they describe as “white elephants”. Some of these are HS2 in England; a rail line in Stuttgart; and the Lyon-Turin TGV in Italy. Susan George, attending the protest, said these bits of infrastructure were damaging and costly for communities, and there are better things to do.   Click here to view full story…

June 22, 2012    Several public inquiries are to be held into the proposed airport at Notre Dame des Landes, at Nantes in western France. These have been hastily announced, to start on 21st June with insufficient notice. They inquiries are only due to last for 4 weeks, and the timing coincides with a busy farming time of year, and the holiday season. Opponents are protesting that the inquiries should be held in September, and should last for 8 weeks in order to fully take account of voluminous evidence papers. Opponents tried to prevent the commissioners entering the town hall, and there were scuffles, use of police force and tear gas, and an arrest. The protester are continuing to try and get the inquiries delayed.    Click here to view full story…

Nantes airport building plans, set back by 2 years by the hunger strike

May 14, 2012    The hunger strike at Nantes, against the Projet d’ aéroport du Grand Ouest, Notre-Dame-des-Landes, ended last week. Now the legal procedures continue, against compulsory purchase of land from farmers and others living in the site, some 30 km north of Nantes, where the airport would be sited and where work would have soon started. The Mayor of Nantes, Jean-Marc Ayrault, had been a keen supporter of the airport for years. He is still very much in favour of it. There is bitterness that he did not once visit the hunger strike over its 28 days, until pressure was put on him by Francoise Hollande’s office to meet one of the campaign. The planned airport would be the main airport for Western France and have up to 9 million passengers per year eventually (current airport has 3 million passengers).     Click here to view full story…

After 28 days the Nantes hunger strike ends, with concession from authorities to reconsider land expropriations After 28 days of hunger strike, which Michel Tarin endured to the end, and 5 others fasted for slightly shorter periods, the strike has ended. At last there have been concessions from the local authorities that the compulsory purchase of land owned by farmers and other local residents will be suspended for the time being. The expropriations will not now go ahead until the outcome of several legal proceedings that have been filed against the proposed airport. It is likely that these legal challenges will take up to two years, giving the campaigners two more years in which to continue their opposition. The hunger strikers ended their fast with bowls of soup, and though exhausted, they are delighted with the result. Drinking their soup together, surrounded by a huge an efficient network of support, the hunger strikers emphasized the quality of support they received each day and the climate of affection and solidarity that has buoyed them up during their ordeal.  Click here to view full story…