There was a referendum in the Loire-Atlantique département on 26th June, with the question whether people backed the moving of the current Nantes-Atlantique airport south of Nantes, to a site north of Nantes, at Notre-Dame-des-Landes. Finally the voting was 55% in favour of the move.  The area to be destroyed for the new airport is good farm land and valuable wetland habitat, and there has been fierce, determined opposition to the project for years. The local opposition, focused through ACIPA, was deeply critical of the way the referendum was organised. They believe areas other than just those in Loire-Atlantique should have been consulted.  Some of these areas would be opposed to the move, and some have to contribute public funds towards it. The government wanted the poll as early as possible, as there is a “declaration of public utility” lasting till October, so work has to start by then. The prime minister, Manual Valls, made a statement as soon as the referendum result was known, that “the government will implement the verdict.” Those backing the new airport want to clear the protesters living illegally on the ZAD, some of the land on which the airport would be built, moved away soon, so clearing work can start.  ACIPA said this result was just one step in their long struggle against the airport, and their struggle now continues.

Notre-Dame-des-Landes: The referendum result was a 55% majority in favour of the new airport

[Imperfect translation into English below]

“Do you support the transfer of the Nantes-Atlantique airport in the municipality of Notre-Dame-des-Landes?”. This is the question put to the Loire-Atlantique voters on Sunday. If the “no” had won, the project would suffer a blow of almost irreversible cessation. If it was ‘yes’, the state is committed to continue.

Participation is quite high, at about 51% especially in the municipalities concerned.

Several hours after the polls closed, and the verdict was clear:: Manuel Valls assured that “the government will implement the verdict of the polls”

The Prime Minister has responded through a press release. He assured that “the government will implement the verdict of the polls” and that preparatory work will start from “next autumn” “The people illegally occupying the new airport site will have to move from there at the start of the work” he added. .

After the victory of “Yes”, airport transfer supporters are likely to react. If they welcome the result, they also require the evacuation of the ZAD and construction began.

In Nantes, the results are super tight

The latest results were those that were missing from Nantes (about a third of voters in the Loire-Atlantique), longer to count.. And the reviews are very mixed: 50.06% for Yes and  49.94% for No, or 100 votes difference out of of about 83,700! Crazy.

Surprise,  the Rezé district, to the south of Nantes city, voted “no”. The main south-Loire city voted    53% against the proposed new  Notre-Dame-des-Landes airport.

The mayor of Nantes is satisfied.  Johanna Rolland (Partie Socialiste) said: “I welcome this result and voter mobilization in the department. I call on each and everyone, regardless of belief, to take note of this result. The democratic will that has been expressed should enable the realization of this transfer in the serenity, security and respect for the rule of law. The state must now carry out this vital project for the West. ”

Philippe Grosvalet, PS Chairman of the County Council, requested the start of work. “Democracy has spoken, the vote of the inhabitants of the Loire-Atlantique should be recognized and respected.”

Shortly before the final count was finished, the main local campaign against the new airport, ACIPA, said they would continue the fight: “The process and content of this consultation were fundamentally biased.  This was based on a series of lies by the State, and radically unfair.  It was for us just one step in the long struggle for a future without an airport at Notre Dame des Landes. This struggle continues tonight,” they said in a  statement.

Bruno Retailleau (a French politician, a member of the Senate of France, representing the Vendée department, and also President of the General Council of the Vendée) said on Twitter:  “Il est temps que la zone de non-droit qu’est la #ZAD de #NDDLpuisse cesser.”  ie. it is time that the illegal ZAD zone at NDDL is ended.  And  “Je demande donc au gouvernement l’évacuation de la#ZAD et le commencement des travaux de l’aéroport.”   ie. I demand now that the government evacuates the ZAD and the start of work on the airport.”

Several areas did vote NO in the referendum.

The original French at

The local opposition around Nantes, to the building a new airport north of Nantes, have produced a series of short videos, setting out some of the issues. There will be a referendum on 26th June, for people in the area, on whether the existing airport, Nantes-Atlantique, should be closed and a new airport constructed at Notre Dame des Landes (NDDL). The opponents of the NDDL airport say, among other things: – The number of flights at Nantes has hardly grown in 10 years. – It is possible to slightly grow the current Nantes-Atlantique airport (just south of Nantes) and slightly extend the runway by 60 metres. – It is possible to take measures to slightly reduce the noise at the Nantes-Atlantique airport. – The new NDDL airpot would cost the taxpayer about €280 million. – There would be no more destinations from the new NDDL airport than from the Nantes-Atlantique airport. Germany has 45 airports, and France has 156 airports. – The NDDL airport would mean the destruction of 700 hectares of wetland and about 900 hectares of farmland. – Many protected species would be lost. – About 200 agriculture-associated jobs would be lost, and most of the alleged new jobs would just move from the old airport. – The costs to passengers will be higher at the NDDL airport. And there is a lot more. With English translations here.

On 26th June there will be a consultation/referendum on the issue of whether the existing airport, Nantes-Atlantique, just south of Nantes should be moved to a site north of the town at Notre-Dame-des- Landes (NDDL). The government announced this referendum back in March.The question that will be asked is: “Do you support the proposed transfer of Nantes-Atlantique airport to the municipality of Notre-Dame-des-Landes?” The referendum is open to voters of the municipalities of Loire-Atlantique. Opponents are running an active campaign, to provide information to every potential voter and attending public meetings, with their spirit of quiet determination. Opponents, including local campaign ACIPA, say nobody asked for this referendum, and it does not in any way legitimize the airport project at NDDL, which they consider to be illegal, ruinous and destructive. They say the conditions for real democratic debate are not met; the area chosen for the referendum excludes some important local communities; the question is biased; and there is no guarantee of fair treatment of the opposition. They are not impressed that the Prime Minister has announced the start of work in the autumn, despite the referendum. They say the airport cannot proceed until various legal matters have been sorted out. There will be another huge anti-NDDL gathering on 9th and 10th July. “On a tous une bonne raison de voter NON.” (We all have a reason to vote NO.)

Public referendum on Notre-Dame-des-Landes airport likely to be in June, and only for Loire-Atlantique département

Manuel Valls, Prime Minister of France, confirmed this week that the referendum on whether the new Nantes airport should go ahead, will only for the voters in the département of Loire-Atlantique. It would also be before the summer, in June. Two key issues about the referendum have been key: the date and the area covered. Keeping it only to Loire-Atlantique suits the government, backing the new airport plan, as it is believed there is more support for the airport there. One poll showed 51% support for the plan, 39% against and 10% undecided. Another poll showed 58% opposition across France as a whole. Opponents of the plan, and others involved, believe areas other than just Loire-Atlantique should be consulted, as they would be affected by environmental, economic and social impacts of the possible airport. The leaders of neighbouring departments such as Mayenne, Morbihan and the Maine-et-Loire have recently criticised the prospect of the consultation’s scope being limited to only the Loire-Atlantique. The Minister of Ecology, Ségolène Royal, defended the idea of the area being extended to the whole of the region Pays de la Loire. The government wants the poll early, so building work and evictions from the ZAD can be started by October. Work needs to start by then as there is a “declaration of public utility” lasting till October. It is likely that the referendum will be either on Sunday 19th or Sunday 26th June.

On the 9th January, there were estimated to have been 20,000 people at huge protests against the planned new airport for Nantes in countryside at Notre-Dame-des-Landes. Then on 26th January, the local court confirmed that 11 families would be evicted from their homes on the ZAD (zone à défendre) within about two months. On 13th February, President Hollande declared there would be a referendum on whether the airport should be built. This has caused local concerns. But neither the date nor the exact questions, nor the scope of the consultation’s geographical area, have been settled. In response to the referendum proposal, the local campaign organised another massive demonstration (manifestation), to show the authorities the strength of feeling against the airport. Around 10,000 to 15,000 people came, from all across France. There are over 100 support committees across the country. They filled all 4 lanes of two local dual-carriageways, for many hours – in a peaceful protest, with a festival atmosphere. Two of the Heathrow 13 (spared prison on 24th February, with suspended 6 week sentences for their Heathrow runway occupation) attended the protest, showing solidarity from the London campaign. Campaigners in Turkey, against the new Istanbul airport, also sent messages of support. 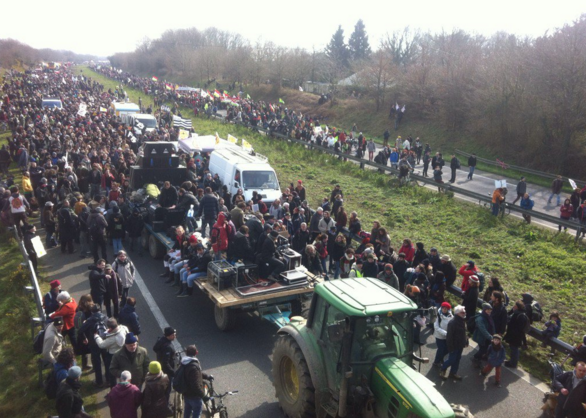