About 1,200 people pack Frankfurt airport Terminal 1 for the 200th Monday protest against noise

At least 1,200 noise protesters gathered at Terminal 1 of Frankfurt airport on 30th January for the 200th of their Monday protests. These have been going on, most Monday evenings, since the 4th runway opened in October 2011. Thousands of people living around the airport find the noise burden to which they are subjected intolerable. One problem was that there was no proper information about flight paths before the runway opened, and the imposition of the noise took many by surprise.  On most Mondays at least 300 people attend. Some Mondays there are more. Their demands are that there must be a night flight ban between 10pm and 6am. The noise ceiling should not only be on the paper, but a noticeable reduction in noise. They would like to see the runway closed, but that is not likely to happen. Campaigners say the airport had been built for 40 years, but none of the growth forecasts so far had been fulfilled, and it is now taking low-cost carriers to fill the capacity.  They say all trips of under 1,000 kilometres should be made by train, not by air.  They say they want an aviation industry that is environmentally responsible, and without subsidies. One speaker at the 200th rally described the current noise as a “terror against the people of the region”. Resistance will continue.

There are videos of the protest at  https://www.youtube.com/watch?v=a0MLH_qIdlc but all in German … 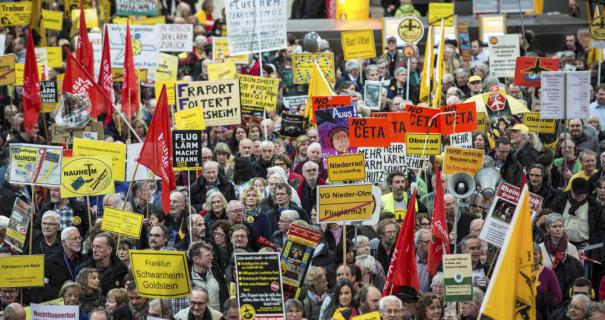 FRANKFURT – They are loud and they arrive at Terminal 1 of the Frankfurt Airport every evening at 6pm. The expansionists from all parts of the Rhine-Main region are not showing any signs of their protest against the noise pollution caused by the Frankfurt airport. At that time, in October 2011, shortly after the inauguration of the northwest runway, it was more than 3000 people. Meanwhile around 300 demonstrators regularly arrive.

But on certain days, as on the Monday evening for the 200th demonstration, there are well over one thousand noise-stricken people from the region around Mainz, from southern Hesse and even from Gelnhausen.

They make a noise with whistles and drums to give Fraport back what the airport operator is calling people into the Einflugschnee day by day. The support is great. On Monday, the Mayors of Mainz, Frankfurt and Offenbach issued a joint statement expressing their civic commitment to the expansion of the airport. Frankfurts Stadtwerke Peter Feldmann (SPD) demanded to stop the expansion finally.

In addition there must be a night flight ban between 22 and 6 o’clock. The noise ceiling should not only be on the paper, but a noticeable reduction in air pollution.

The spokesman for the municipal action group “Zukunft Rhein-Main”, the mayor of the city of Gross-Gerau, Thomas Will (SPD), said the airport must finally take leave of its development fantasies.

The airport had been built for 40 years, but none of the growth forecasts so far had been fulfilled.

The fact that Fraport now also takes low-cost carriers to Frankfurt is for Will “a scandal unparalleled”. First, the expansion of the  Hahn airport with more capacity for low-cost carriers was justified, now they are taken from there to Frankfurt. “We are not tired of standing together over all the parties and showing that we continue to resist, and whoever talks about low-cost jobs from qualified jobs is spoiling a whole region,” says Will.

Main speaker Uwe Hiksch, a member of the board of the Naturfreunde in Germany, demanded a reduction of the flight movements. All flights of less than 1000 kilometers should be relocated to the railway.

The people had to resist, so that the Rhine-Main region would still be worth living in the coming decades.

“We want an ecological traffic change without subsidised air traffic”. He described the current noise as a “terror against the people of the region”.

He encouraged, as well as other representatives of the citizens’ initiatives, the Montagsdemonstranten to continue and in their resistance not to let up, even if the impression prevails that he is not important among the group leaders. “We can resist,” said Uwe Hiksch.

Monday-Monday, people from the Rhine-Main area protest against the noise at Frankfurt Airport. Politicians from Mainz participated in the 200th protests.
The mayor Feldmann (SPD, Frankfurt am Main, left), Ebling (SPD, Mainz,) and Schneider (SPD, Offenbach am Main, right)
In the meantime, Mondaysdemo has become a ritual of aircraft noise: since the opening of the runway northwest of 2011, they have consistently demonstrated that they meet every Monday night at Terminal 1 of the Frankfurt Airport. The jubilee demonstration attracted at least 1,200 attendees, who were loudly against a further expansion of the airport and for an extension of the night flight ban from six to eight hours.
“The terminal has shaken,” said Thomas Scheffler, spokesman for an alliance of some 80 citizens’ initiatives. He was delighted that more people joined the traditional demo. Co-initiator Dirk Treber had expected up to 3,000 people.

Ulrike Höfken (Greens), Rhineland-Palatinate’s Minister of the Environment, said in a greeting saying, “We need a federal regulation that introduces noise ceilings and legally fixes night-time restraints.” We also want citizens to be involved in the revision and the substantial modification of flight routes Be involved. “
The Mayor of Mainz, Michael Ebling (SPD), also participated in the protests. He was supported by his colleagues from Frankfurt and Offenbach. Ursula Fechter, Ursula Fechter, emphasized: “Air traffic has negative health consequences.”

A spokesman for the Mainz initiative against noise, said the continuing protest. In recent years, noise protection measures and the night flight ban had been won. The result is that the airport is not growing so fast. Thus, there are fewer flight movements from year to year.
A spokesman for the airport operator Fraport mentioned other reasons for the sinking figures. For example, many tourists have not booked air travel for fear of terrorist attacks in popular holiday countries.
http://www.swr.de/landesschau-aktuell/rp/mainz/montagsdemo-am-frankfurter-flughafen-200-mal-laerm-gegen-den-fluglaerm/-/id=1662/did=18920414/nid=1662/l1gnb0/
.
.

The 4th runway at Frankfurt was opened in October 2011. Due to re-alignment of flight paths, with thousands of people either newly overflown, or with more flights than before, there was uproar. The airport had not felt it necessary to warn people, or consult about the noise.  Several thousand people started to congregate in the airport terminal every Monday evening, for a protest demo. (The airport buildings are public property, so the airport cannot prevent people gathering.). The 100th Monday demo was on 20th May 2014, when a group from the UK attended. Now the 200th Monday demo will take place on Monday 30th January, and a large crowd is expected. Politicians from the local area and from the region, as well as for Berlin, will be attending.  The demands of the protesters are ultimately that the runway is closed down (though that is an ambitious, or unrealistic hope….) but they want no night flights from 10pm to 6am, no further airport expansion, and no 3rd terminal.  Work to build the 3rd terminal started in October 2015, and the airport hopes it will open (first phase) in 2022. It is an astonishing achievement that Frankfurt residents have organised 200 Monday protests, all attended by many hundreds of people – sometimes several thousand. The demos are possible because people are so upset and angry about the noise burden that has been inflicted on them, reducing their quality of life.