Dodgy economics behind plans to expand our airports – they won’t tackle unemployment, or bring more money to the UK

A useful article from the New Economics Foundation looks at the reality of claims about the economic benefits of expanding airports. Traditionally airports have said they are vital for business travel; the reality is that a small proportion of air passengers are on any sort of business trip, and that is especially the case at regional airports. Most air passengers are British people flying on leisure trips abroad (to spend their money there).  Regional airports claim that they merely take passengers who would otherwise have flown from the larger airports, such as Heathrow and Gatwick. The reality is more people take cheap leisure flights from a convenient local airport.  There is always a lot of hype about the number of jobs that airport expansion will create, but in fact the sector has been automating as much as it can, and the number of jobs  – the “job intensity” – is lower than it was in 2007, while the number of passengers has risen significantly. Airports have also reduced squeezed the working conditions of some airport workers, to gain “efficiencies.” NEF says: “Despite what airport executives say, expanding our airports won’t tackle unemployment or bring more money to the UK.”
.
Tweet

THE DODGY ECONOMICS BEHIND EXPANDING OUR AIRPORTS

Despite what airport executives say, expanding our airports won’t tackle unemployment or bring more money to the UK.

Given the widely publicised collapse in international air travel, you’d be forgiven for assuming that expanding airports would be the last thing on aviation executives’ minds. Yet planning applications are currently under consideration for Leeds Bradford Airport and Southampton Airport; Bristol Airport just announced they are appealing North Somerset Council’s rejection of their plans; and Heathrow Airport refuse to accept their substandard mega-expansion is dead in the water.

The climate case against all of these projects is obvious. Regional airports try to claim that their expansions won’t create new flights – rather, they’ll simply steal flights from other airports around the country. But it only takes one look at the data to debunk this myth. More airport capacity leads to higher passenger numbers – and higher emissions. The last financial crisis slowed passenger growth, but only temporarily, and the sector is banking on a similar recovery from Covid-19.

At the national level, the economic case for increasing airport capacity has long been flimsy – and in the midst of a global pandemic and crippling recession, it is even more so. Politicians extolling the virtues of air travel will often refer to the benefits for business, but in reality the proportion of flights taken for business trips has been declining consistently for almost two decades. In 2019, only 15% of UK departures were for international business purposes, and only 4% for domestic business. Around 75% of departures were for international leisure trips. Of this figure, the majority (62%) are UK residents, meaning that far more UK residents fly out for leisure than foreign residents fly in.

The picture at the non-London airports looking to expand is even more extreme. Take Leeds Bradford: in 2017 only 7% of departing flights were for business purposes. The vast majority (85%) were international leisure trips, of which only 22% were taken by foreign residents. The rest were UK residents on their way out. It’s a similar story at all of the regional airports proposed for expansion.

Now, let’s consider the impacts of the global pandemic. Covid-19 has forced businesses into a mass adoption of remote working and online conference calls, and there has been plenty of polling which suggests that business and employee behaviours have changed for good. Business air travel, and its future role at airports like Bristol, Leeds Bradford, and Southampton, only looks set to decrease.

This means that business travel does not and will not drive the economics of airport expansion – instead, we must consider the impacts on international tourism. UK travellers flying abroad and international travellers flying into the UK spend about the same amount – around £700 per person. But as more UK residents fly out than international tourists fly in, the UK operates a significant travel spending deficit. Indeed, about £30bn moves out of the economy every year due to international travel. And the problem is getting worse: after inflation, this deficit doubled between 2012 and 2019, driven almost exclusively by increasing numbers of passengers flying out of the UK. At the same time, spending on domestic tourism has flat-lined since at least 2006, despite significant growth in both the population and economy.

What regional airport expansion does do is provide competitive advantage to the international tourism market. Flying becomes cheaper and easier at a time when the domestic tourism, hospitality, and leisure industries are crippled by the impact of Covid-19. Where do we want people spending their money? Opening a new airport terminal that offers cheap flights out of the country just as we attempt to rebuild our economy is the worst possible timing.

The last defence of the ambitious airport executive is that new airport capacity creates new jobs. But it’s not that simple. When we looked at the expansion of Southampton airport, we found that the economic value of these jobs (worth around £50m) is actually wiped out by the cost of the associated carbon emissions (worth around £28m-£85m) – that’s if we assume these jobs will ever materialise.

The issue with the promise of a plethora of airport jobs is the ongoing efficiency drive in the industry, driven by processes like automation. The ​‘job intensity’ of aviation (ie, the number of jobs per passenger) has been falling consistently for more than a decade. As shown in the figure below, and discussed in our recent report on crisis support to aviation, sector jobs have never recovered to their peak in 2007, despite huge growth in passenger numbers. We already have plenty of evidence that this trend will continue, as airlines exploit this economic crisis as an opportunity to squeeze working conditions and pursue further ‘efficiencies’. 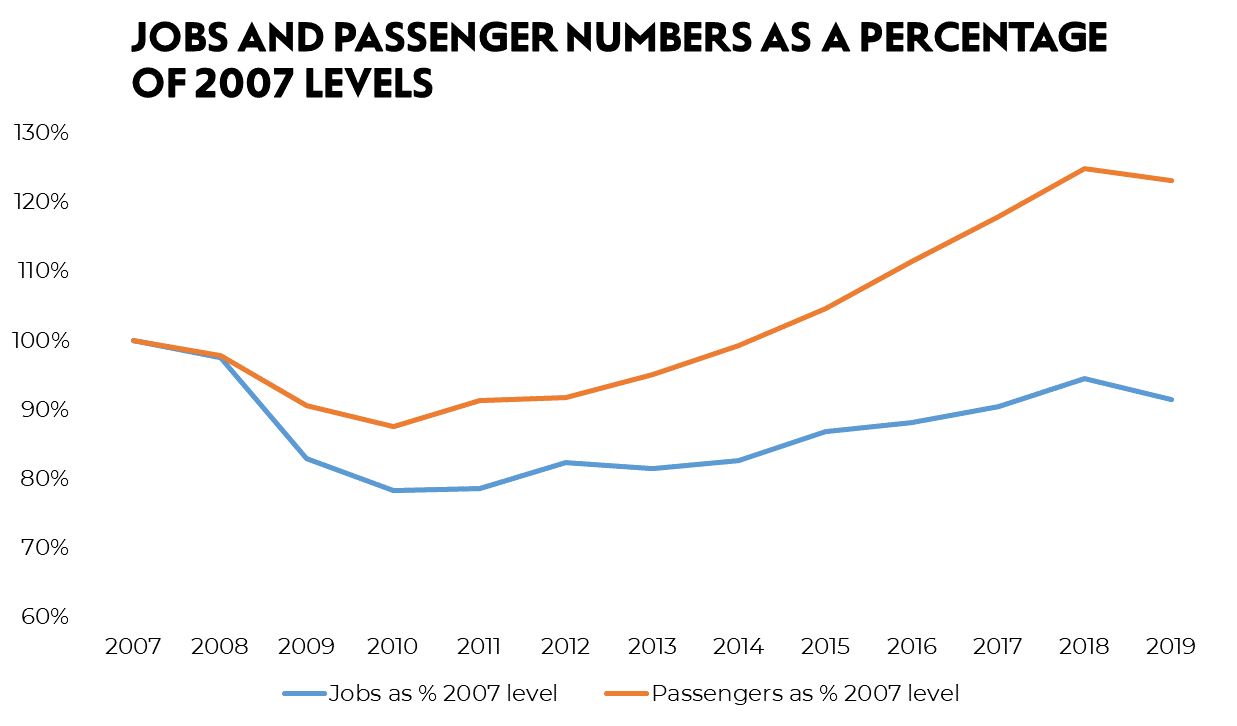 Even without the dangers of increasing carbon emissions, the economics of airport expansion don’t stack up. As we look down the barrel of the climate crisis, a global pandemic, and a collapsing UK hospitality sector, it’s possibly the worst investment we could make.

Faced with an unprecedented economic recession and high unemployment, we do need economic stimulus and job creation. Infrastructure investment should — and likely will – be part of the next government budget. But instead of investing in industries like aviation, with low job-creation potential and high carbon emissions, we should be investing in green infrastructure and green jobs. At NEF we’ve found, for instance, that there is huge job creation and fiscal stimulus potential if we invest in upgrading and decarbonising homes.

Regardless of the size of our airports and the speed at which the sector decarbonises, job numbers in aviation are likely to fall. Rather than expanding airport capacity we should be seizing the opportunity presented by the government’s furlough scheme and supporting aviation workers to access new green jobs – upskilling and retraining under-used employees for careers in low-carbon industries.

The current clampdown on international air travel has helped the UK Balance of Payments, by reducing the country’s trade deficit by almost £3 billion per month.  This is from the “tourism deficit”, which is the amount by which the amount spent by British people travelling and spending abroad, exceeds the amount spent by visitors to the UK. Figures released on 22nd May by the government’s  Office of National Statistics (ONS) show that the UK posted a record trade deficit of £33.9 billion on international tourism in 2019.  This is more than £2 billion above the 2018 figure which was itself a record tourism trade deficit.  The ONS data shows 88.2% of the tourism deficit was due to air travel.  UK residents made 93.1 million visits abroad in 2019, spending a total of £62.3 billion overseas. By contrast, overseas residents made 40.9 million visits to the UK, spending £28.4 billion. The net result was a £33.9 billion deficit in the UK Balance of Payments. Just 9.0 million of the 93.1 million overseas visits (9.7%)  by UK residents in 2019 were for business purposes. The lack of money leaving the UK comes at the expense of countries such as Spain, Greece and Italy losing billions of €s in revenue from UK tourists.

David Cameron has visited Birmingham airport, and effusively welcoming the announcement that 8,000 new jobs would be created, principally as a result of the long-awaited runway extension, with anticipated direct links to destinations like the West Coast of America and China. Shamelessly linking the airport jobs announcement with totally unrelated Government tax-cutting measures, the PM boomed: “The announcement of 8,000 jobs from Birmingham Airport is more great news in a week when we are cutting tax for 26 million hard-working people and taking over three million people out of income tax altogether.” Paul Kehoe used the PM’s visit for his PR purposes.  Kehoe says by 2020 he forecasts Birmingham airport will have 15 million passengers a year, up from 9 million now. He claims this will create 4,000 jobs on-site and a further 4,000 in the immediate supply chain (doubtful figures, generally involving much double counting and optimism). “Politicians and business leaders are very good at talking the talk, but not always so assiduous at walking the walk.”

Ryanair is putting out statements that in its deal with MAG at Stansted, to increase the number of Ryanair passengers by 50% over 10 years, that it will – allegedly – create 7,000 new jobs. This claim is based on an outdated, and very frequently trotted out, assumption that some 1,000 new jobs are created for each additional 1 million passengers flying on an airline. The full service airlines, flying a lot of first class passengers on long haul flights, have a high ratio of staff to passengers. The cheapest low cost flights, offered to European destinations by the no-frills airlines, do not.  Recent figures from Ryanair’s annual reports, show that between 2011 and 2013, Ryanair had an extra 7.2 million passengers, but only 996 more staff. That works out as about 138 new Ryanair  jobs per extra million passengers. Recent figures from EasyJet’s own data show that in 2012, for each additional million EasyJet passengers, there were 41 new EasyJet jobs. There will be some extra airport jobs, to support more flights – but the level is nowhere remotely near 1,000 per million. That figure is exaggerated at least 5-fold, or more.  In reality Ryanair creates as few extra jobs as possible, because it shaves costs to the bone.