Network Rail has now confirmed that staff working on the Western Rail Link to Heathrow  have been moved on to other projects, as there isn’t enough money to keep building it. The proposed link goes from the Great Western Main Line at Langley to Terminal 5.  Plans to build a £900M western rail link have been brought to a “controlled pause”, or mothballed, by Network Rail due to the impact of Covid-19 on the aviation industry and Heathrow’s finances. Heathrow is currently unable to commit any funding to the project due to its precarious financial position, with a £2 billion loss announced in February.  The indefinite delay to the rail link was disclosed in the minutes of the Network Rail board meeting on 20 and 21 January 2021, published in March. It is possible that the scheme could be resumed  at some future.  The DfT would periodically update its business case for the Western Rail Link to Heathrow, in the light of significant changes to both the aviation and rail sectors as a result of Covid. The delay will continue, if Heathrow does not get passengers – and earnings – back. The scheme will be pushed further down the priority list.
.
Tweet

Network Rail staff working on the Western Rail Link to Heathrow have been moved on to other projects with no sign of the mothballed scheme restarting any time soon.

Plans to build a £900M western rail link to Heathrow Airport have been brought to a “controlled pause” by Network Rail as a result of the impact of Covid-19 on the aviation industry, as revealed by NCE last month.

Network Rail has now confirmed that staff working on the scheme have been moved on to other projects, until Heathrow Airport Ltd (HAL) is able to commit to its share of the project’s funding.

HAL is currently unable to commit any funding to the project due to its precarious financial position as a result of passenger decline due to Covid-19.

In February HAL announced a £2bn loss for the financial year, with passenger numbers down 22M in 2020 compared to the year before.

NCE revealed in December that work on the scheme to provide west-facing direct rail access from the Great Western Mail Line (GWML) to Heathrow Terminal 5 was being pushed back by at least a year. However, the indefinite delay to the project was disclosed in the minutes of the Network Rail board meeting on 20 and 21 January this year, which were published in March.

Until late last year, it was understood that the Department for Transport (DfT) had instructed Network Rail to its development consent order submission from the end of 2021 to winter 2022 as part of funding agreement negotiations.

However, just a month later Network Rail western route director Mike Gallop presented a report, which has not been publicly released, on the project to the board and confirmed the scheme was to be mothballed and staff currently working on the scheme reallocated to other projects.

Gallop told the board that the controlled pause did mean that the scheme “could be picked up again at some future point”. He added that the DfT would periodically update its business case for the Western Rail Link to Heathrow to reflect any significant changes to both the aviation and rail sectors as a result of the pandemic.

Rail industry insiders told NCE that further delays to the scheme and the impact of Covid-19 on Heathrow’s passenger number could see the scheme pushed further down the priority list.

A Department for Transport spokesperson added: “The aviation industry has faced unprecedented challenges from Coronavirus. The Government and Heathrow Airport Ltd both remain committed to taking the project forward once an appropriate financial contribution can be agreed, subject to a satisfactory business case.”

A spokesperson for HAL added: “Heathrow remains committed to the Western Rail Link, a project which will facilitate sustainable travel and regional connectivity.

“We’ve proposed a way for the scheme to progress in line with the revised timings announced in December 2020 and we continue to engage with Government and the regulator to find a solution that will unlock the project’s much needed benefits in a post-COVID world.

“The CAA and the DfT now need to work with us to agree terms that will enable this project, which has the widespread support of businesses and MPs, to move forward, despite the airport’s current challenges.”

What was the aim of the Western Rail Link to Heathrow? 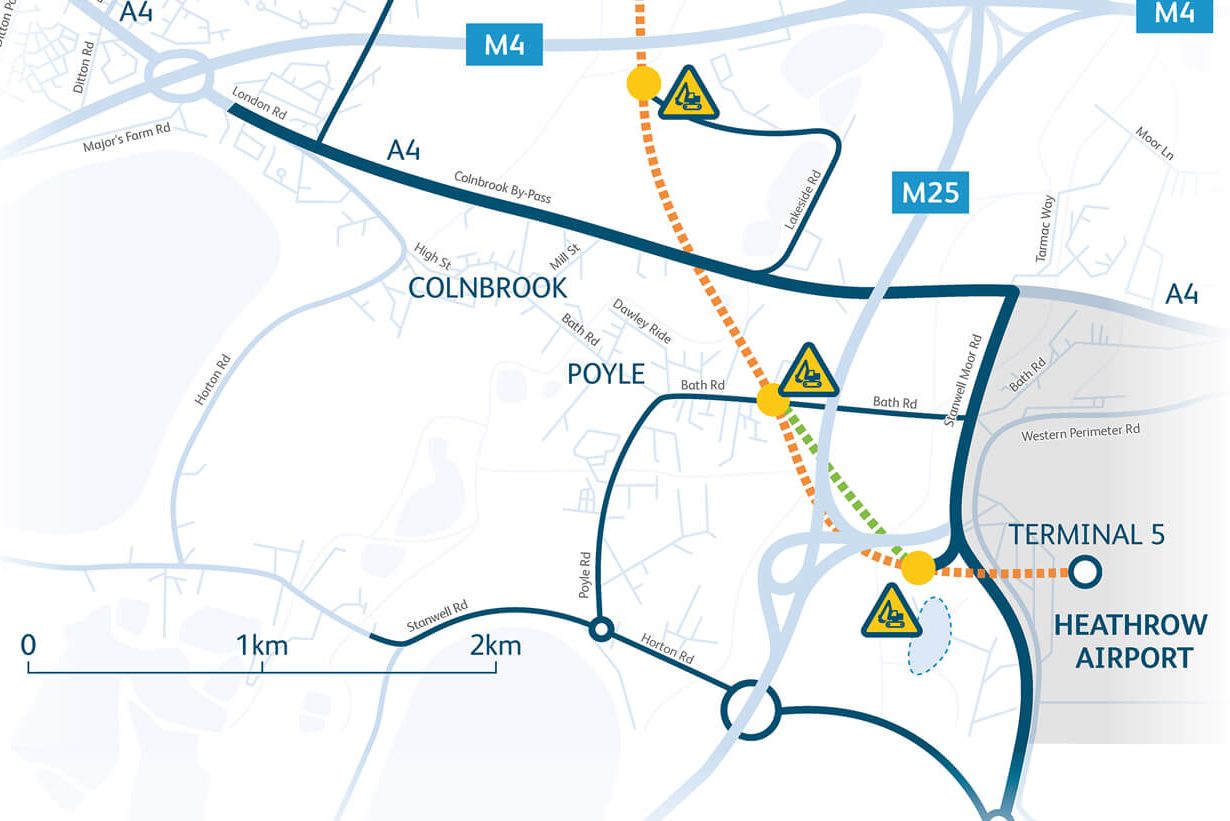 Network Rail has previously said that it would speed up journeys to Heathrow and help increase economic productivity in the Thames Valley.

Passengers would be able to travel to the airport from the South Coast, South West, South Wales and West Midlands without going into London Paddington.

The link would leave the Main Line between Langley and Iver. It would then descend underneath the main railway line into a cutting before entering a 5km tunnel.

The tunnel would pass under Richings Park and Colnbrook before merging with existing rail lines underground at Terminal 5.

How much of the cost would Heathrow pay, and how much by the taxpayer?

Plans for a new rail line connecting Heathrow airport with the Great Western main line are being held up over how much the government is prepared to stump up.

Initially intended to be entirely privately funded, the project is now waiting for confirmation of public funding before it can proceed.

The Great Western rail link between Reading to Heathrow will be delayed by up to two years. A DCO application to construct the new line was expected this year but has now been delayed until winter 2021/2022 – at the earliest.  A spokesman for Network Rail said the Reading to Heathrow line has been delayed due to the court of appeal’s ruling against plans to expand Heathrow and the impact of Covid-19 on the aviation industry. The Supreme Court will hear Heathrow’s appeal against the Appeal Court decision, on 7th and 8th October. If Heathrow was to win the case (a massive IF) then the rail link – to speed passengers getting to the airport – a new tunnel would be created connecting Reading to Heathrow in around 20-30 minutes, with passengers from Reading currently having to use the 50-minute Rail Air bus or go into London to get to the airport.  Reading Station and Heathrow Airport both already have terminus platforms built for the line in anticipation of the scheme. The Department for Transport (DfT) is looking to fund the project with help from Heathrow Airport on the basis of expansion, apparently. (Though Heathrow is struggling financially to survive now …)