A total of 120 social, neighbourhood and environmental organisations are calling on the Spanish Government to halt the expansion projects for the Madrid Barajas and Barcelona El Prat airports. With this demand, the groups are responding to the intense lobbying campaign being carried out by the airport manager AENA to obtain support in different areas, without any public presentations of the projects and with a total lack of technical, social, environmental, economic, financial and budgetary justification. The expansion at Madrid airport is to increase annual passengers from 70 to 80 million; at Barcelona it would rise from 55 to 70 million.  Airport expansion and the growth of aviation are entirely incompatible with climate objectives and commitments. The signatory organisations want the €3.4 billion budgeted for the expansion projects be invested instead in low carbon travel, such as rail. Apart from the carbon emissions, the expansion of Barcelona airport is planned in the area of La Ricarda, an area protected by the Natura 2000 network. The extension of the third runway would also endanger the aquifer system that provides water for the city and is vital for the natural and agricultural areas of the Llobregat Delta.
.
Tweet

No to Madrid and Barcelona airport expansions 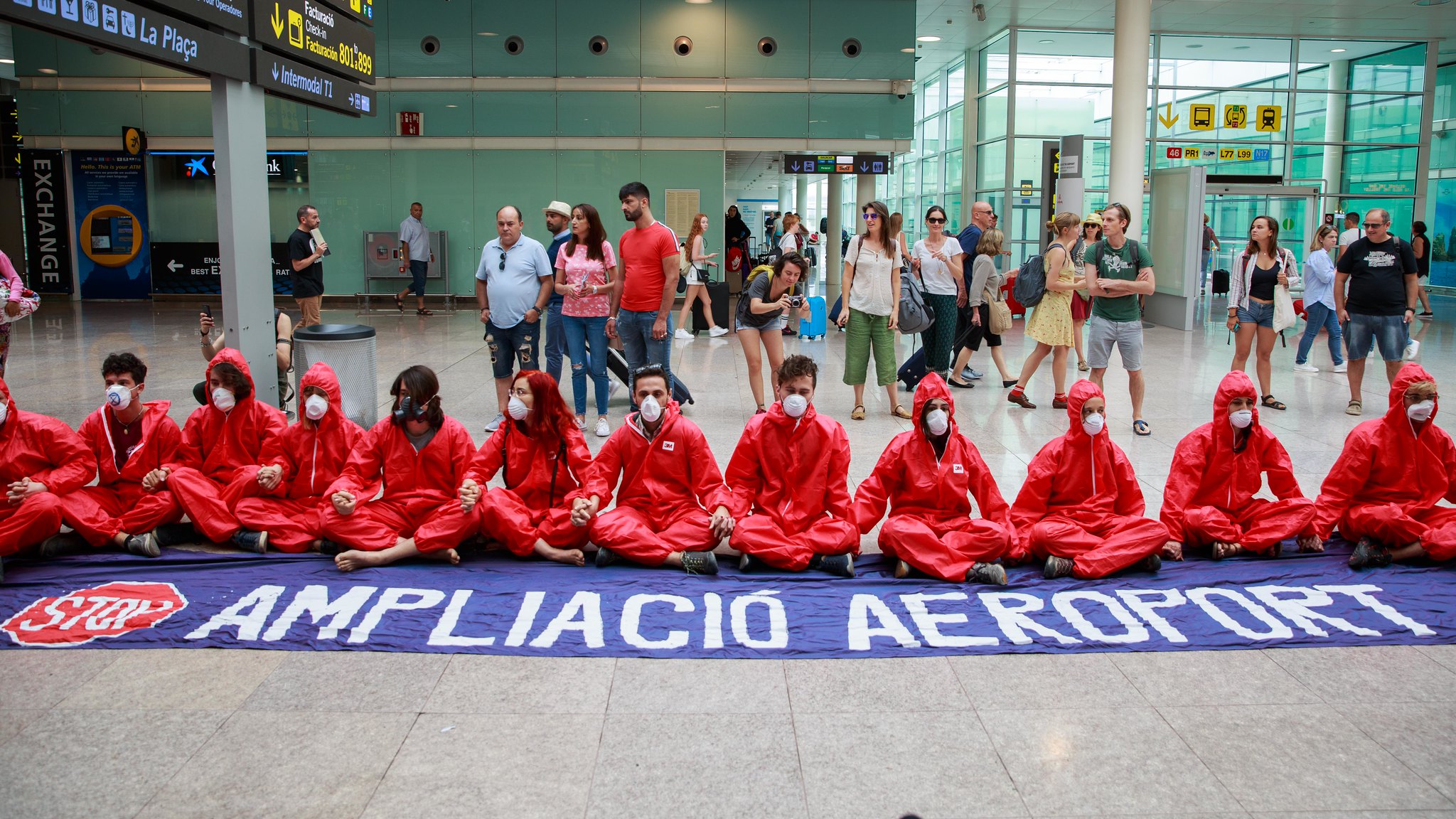 Madrid, 27 July 2021 – A total of 120 social, neighbourhood and environmental organisations are calling on the Spanish Government to halt the expansion projects for the Adolfo Suárez – Madrid Barajas and Josep Tarradellas – Barcelona El Prat airports. With this demand, the groups are responding to the intense lobbying campaign being carried out by the airport manager AENA to obtain support in different areas, without any publicly presented project and with a total lack of technical, social, environmental, economic, financial and budgetary justification. The final decision on the future of these expansion plans, with an initial cost of some 3.4 billion euros and whose works would not begin until 2025, should be announced by the government at the next Council of Ministers on 30 September.

The projects to expand Madrid and Barcelona airports – not the only ones planned in Spain – are two clear examples of a transport policy focused almost exclusively on the construction of large infrastructures in favour of the most polluting means of transport, such as the aeroplane. This vision of mobility promoted by the government is contrary to the model we need to move towards in the context of the climate emergency in which we find ourselves. A model oriented towards the promotion of the most energy-efficient and low-emission modes of transport, in which investments prioritise the travel needs of the population as a whole and not the economic profitability of a few economic operators.

In view of the above, the organisations signing this press release express their opposition to the aforementioned airport expansion projects and call for their cancellation both to the Government and to the Autonomous Communities and municipalities involved, for the following reasons:

Europe has agreed to reduce its greenhouse gas (GHG) emissions by at least 55% by 2030 compared to 1990 levels.  Aviation is by far the mode of transport that generates the most GHG emissions per passenger carried. In 2019, Barcelona-El Prat airport generated 8.4 million tonnes of CO2, more than double all the emissions from the city’s energy consumption. Taking into account the planned capacity expansion – from 55 to 70 million passengers per year – emissions could increase by at least 33% according to a recent report by the Barcelona Urban Development Agency. Similarly, increasing the capacity of Madrid – Barajas (from 70 to 80 million) would mean an exponential increase in emissions. This is totally incompatible with European commitments and with environmental legislation at both state and regional level.

On the other hand, the expansion of airport infrastructures has a very negative impact on the surrounding ecosystems and fauna. This is particularly worrying in the case of Barcelona-El Prat, as the airport expansion is planned in the area of La Ricarda, an area protected by the Natura 2000 network. The extension of the third runway would also endanger the aquifer system that guarantees the drinking water consumption of the metropolitan area and the good state of the natural and agricultural areas of the Llobregat Delta. It should also be remembered that last February the European Commission opened proceedings against the Spanish State for negligence in the protection of the delta, and has asked both the Government and the Generalitat for explanations on the actions they are taking to preserve the area. To date, AENA has still not complied with the environmental compensation actions committed to in the previous airport expansion, set out in the 1998 environmental impact statement, and is presenting them again as if they were new in this new expansion, affecting the agricultural area and avoiding other impacts such as the increase in emissions.

Social and health impacts on the population:

Although often invisible, air transport and airport activity is a major source of ultrafine particles, soot and noise, among others. Numerous studies have shown how people living near airports are more likely to suffer from cardiovascular diseases, hearing impairment, sleep disturbances or impaired cognitive performance.

Speculative projects against the general interest:

In the context of the aviation and energy crisis and economic contraction, the investments presented, at a cost of approximately 3.4 billion euros, represent a speculative operations that fundamentally favours construction companies and banks, as well as AENA’s private shareholders (49%), in which some of the world’s largest investment funds participate.

In this sense, taking into account the uncertain prospects of global air traffic recovery and the fall in world oil production, on which aviation will continue to be dependent in the medium and long term, presenting investments in airport infrastructure growth can only be understood as a manoeuvre to hide AENA’s deep financial crisis.

These projects also respond to the interests of big real estate and mass tourism capital, which are trying to make a short-term profit in the current global crisis. A model that is at the origin of the increase in inequalities, the expulsion of housing, the destruction of local neighbourhood commerce, the precariousness and exploitation of labour, air and noise pollution, the exponential increase in CO2 emissions and the loss of agricultural and natural spaces.

For all these reasons, the undersigned organisations and collectives demand that the Government:

The Delta del Llobregat, one of the most important wetlands in the western Mediterranean, is being eroded on one side by the sea and on the other by Barcelona’s land-hungry airport. Before the pandemic there were already close to 90 flights an hour and, if the airport authority has its way, this will increase still further. The delta covers 920 hectares and has 14 distinct ecosystems, ranging from coastal, marshland and lagoons to pine forests and farmland. As well as being home to a birds, a colony of turtles, there are more than 1,000 plant species, including 22 varieties of orchids. In the decades-long war of flamingos versus air passengers, the flamingos have lost every round. The airport wants to extend the runway into the wetlands and build another terminal, allowing passenger numbers to rise from 55 to 70 million a year. But now the European commission has weighed in, accusing the Spanish and Catalan governments of failing to protect the wetlands and warning against a proposed expansion of the airport. The EC says the Llobregat Delta ecosystem hosts outstanding biodiversity and plays a crucial role in the migratory routes of many European bird species.