It was announced in September 2020 that the Great Western rail link between Reading and Heathrow would be delayed by up to two years. It was first proposed in 2012. A DCO application to construct the new line is not expected for some time. Heathrow was set to pay for much of the cost, as the link would benefit its passengers. But in April Heathrow withdrew its funding, because of the crisis in its finances due to the pandemic.  Other funding from the private sector will be “much smaller” than previously envisaged.  So it looks as if taxpayers may have to fund most of a £900m bill. The rail minister, Chris Heaton-Harris, told a parliamentary committee last week that he would recommend that taxpayers pay instead, as part of Chancellor Rishi Sunak’s spending review this autumn.  Network Rail said that the Department for Transport had asked it to delay beginning the project by a year until the winter of 2022.  It said it would not progress until there was a satisfactory financial arrangement, “including an appropriate financial contribution from Heathrow Airport Limited (HAL); this requires endorsement by the Civil Aviation Authority (CAA) as the relevant regulator.”
.
Tweet

Taxpayers may have to fund most of a £900m bill to build a train line linking Heathrow to the West Country after funding from the airport and other private investors fell through.

Chris Heaton-Harris, the rail minister, said he would ask the Treasury to pay for building a line between Heathrow’s Terminal 5 and the express line that links London Paddington with Reading and the west of England and Wales.

The Western Rail approach to Heathrow has been nine years in the making, having first been proposed by Theresa Villiers, then transport minister, in 2012.

Under Chris Grayling, the former Transport Secretary, it was included in a series of rail building projects that would be funded by private capital. The state owns Britain’s tracks and other rail infrastructure through government-owned Network Rail.

Hopes of it being built appeared to have been dashed in April when Heathrow withdrew its funding as a result of its finances being squeezed by the coronavirus pandemic.

But Mr Heaton-Harris told a parliamentary committee last week that he would recommend that taxpayers stump up the funds instead as part of Rishi Sunak’s spending review this autumn.

He conceded that the funding from the private sector will be “much smaller” than previously envisaged.

“Whatever it is, I will be making, in the spending review, a bid from our department for the Western Rail Link to Heathrow.

“Obviously, the bigger the private sector contribution, the better the business case and the more favourably that will be seen by my Treasury colleagues.

“But my commitment to you and Heathrow still stands. It will be included in my department’s spending review bid.”

Network Rail said that the Department for Transport had asked it to delay beginning the project by a year until the winter of 2022.

A spokesman for the organisation added: “The scheme is subject to a satisfactory business case and agreement of acceptable terms with the Heathrow aviation industry, so can only progress to [planning] submission when funding has been agreed, including an appropriate financial contribution from Heathrow Airport Limited (HAL); this requires endorsement by the Civil Aviation Authority (CAA) as the relevant regulator

“The Government has been working closely with HAL, but the coronavirus pandemic has had a significant impact on the aviation and rail industries. This in turn has affected Heathrow Airport’s ability to commit to a financial contribution to the scheme at this time. 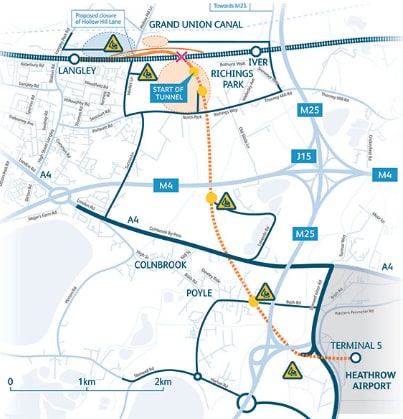 “The Government will continue to work closely with HAL to agree funding arrangements that offer value for money for the taxpayer and for the users of the airport.”

A spokesperson for Heathrow said in April: “Heathrow remains committed to the Western Rail Link, a project which will facilitate sustainable travel and regional connectivity.

“We’ve proposed a way for the scheme to progress in line with the revised timings announced in December 2020 and we continue to engage with the Government and the regulator to find a solution that will unlock the project’s much needed benefits in a post-Covid world.

“The CAA and the DfT now need to work with us to agree terms that will enable this project, which has the widespread support of businesses and MPs, to move forward, despite the airport’s current challenges.”

Network Rail has now confirmed that staff working on the Western Rail Link to Heathrow  have been moved on to other projects, as there isn’t enough money to keep building it. The proposed link goes from the Great Western Main Line at Langley to Terminal 5.  Plans to build a £900M western rail link have been brought to a “controlled pause”, or mothballed, by Network Rail due to the impact of Covid-19 on the aviation industry and Heathrow’s finances. Heathrow is currently unable to commit any funding to the project due to its precarious financial position, with a £2 billion loss announced in February.  The indefinite delay to the rail link was disclosed in the minutes of the Network Rail board meeting on 20 and 21 January 2021, published in March. It is possible that the scheme could be resumed  at some future.  The DfT would periodically update its business case for the Western Rail Link to Heathrow, in the light of significant changes to both the aviation and rail sectors as a result of Covid. The delay will continue, if Heathrow does not get passengers – and earnings – back. The scheme will be pushed further down the priority list.

The Great Western rail link between Reading to Heathrow will be delayed by up to two years. A DCO application to construct the new line was expected this year but has now been delayed until winter 2021/2022 – at the earliest.  A spokesman for Network Rail said the Reading to Heathrow line has been delayed due to the court of appeal’s ruling against plans to expand Heathrow and the impact of Covid-19 on the aviation industry. The Supreme Court will hear Heathrow’s appeal against the Appeal Court decision, on 7th and 8th October. If Heathrow was to win the case (a massive IF) then the rail link – to speed passengers getting to the airport – a new tunnel would be created connecting Reading to Heathrow in around 20-30 minutes, with passengers from Reading currently having to use the 50-minute Rail Air bus or go into London to get to the airport.  Reading Station and Heathrow Airport both already have terminus platforms built for the line in anticipation of the scheme. The Department for Transport (DfT) is looking to fund the project with help from Heathrow Airport on the basis of expansion, apparently. (Though Heathrow is struggling financially to survive now …)