How aircraft are certified for noise

The measurement is made using three readings.

These are on approach (2km from the landing threshold), sideline on the runway, and takeoff (6.5km from start of roll). Each new aircraft type gets a noise certificate.

These are carried out under test conditions performed by certification bodies. EASA is currently responsible for Europe.

There is some information in this ICAO presentation-

It is well known that there are big differences between certified levels and actual noise levels at airports.

The images below, showing the three points at which aircraft noise is tested, for certification, are from  http://noisedb.stac.aviation-civile.gouv.fr/
1. Approach – central line
2 km from the touchdown threshold, at 120 metres height (which is the height of a plane making a descent at 3 degrees.

2.  Take off – two lateral measurements
Noise measured at two places each 450 m to the side of the take off line, at maximum take off volume.

3. After Take off – central line
6.5km from start of roll, on the centre line. (No height is specified or any take off angle.)

There is a lot of technical data on each plane and its noise measurements etc at  http://noisedb.stac.aviation-civile.gouv.fr/

From an AirportWatch member:

The certification of aircraft for external noise is all part of the development and design programme for the aircraft.

With the A380, the aircraft was designed to meet or better the future noise limits proposed for Heathrow back in the early 2000’s.   Airbus could have built it noisier, certificated it to the limits of the day and got away with a noisier aircraft.

The actual noise tests to check compliance are very detailed and take some time. They’ll be over a range of noise monitors and in various atmospheric conditions.

The assumption that they are done by a couple of pilots who know how to fly quietly is simply a product of the conspiracy theorists!

Scientific engineers take the readings and translate them into noise metrics which are then what we see quoted.

Locations for the tests vary and will depend on where the aircraft is built. (Boing USA, Airbus Europe etc).

Again for the Airbus A380 some test were carried out at Heathrow to ensure it did meet the proposed (at the time) new criteria.

“The certification programme for the GP7200-powered A380, including noise testing, has been carried out with A380 flight test aircraft MSN009.  In May this year, MSN009 confirmed its low noise emissions during a series of certification tests that were performed at the Spanish Air Force base at Morón de la Frontera in southern Spain and jointly witnessed by European and US noise authority specialists.”

There is more detail at
http://www.icao.int/Meetings/EnvironmentalWorkshops/Documents/NoiseCertificationWorkshop-2004/BIP_2_2_jb.pdf
. 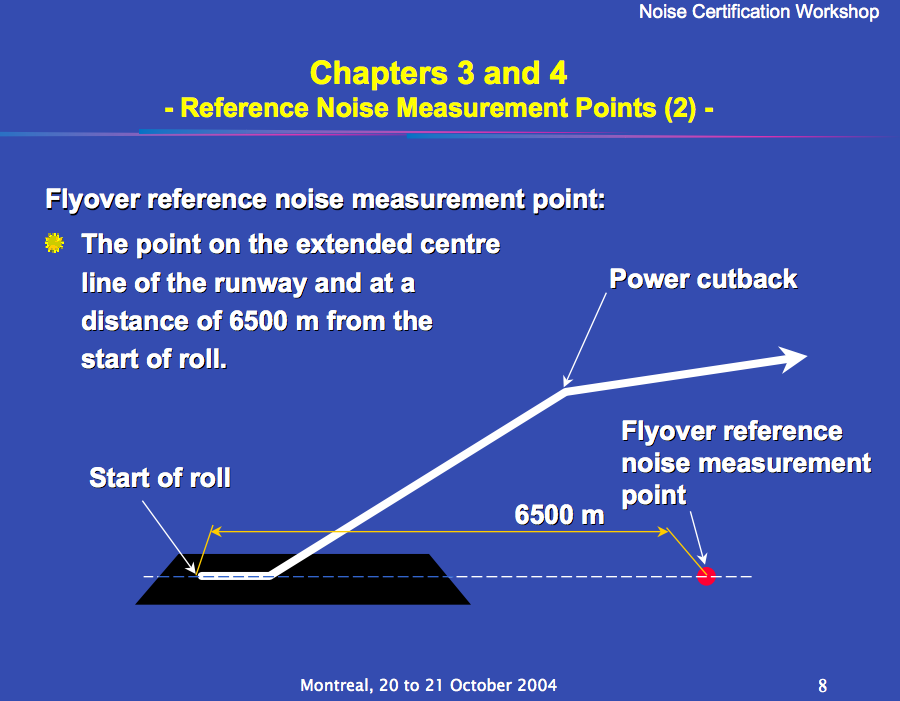 EPNdB, or Effective Perceived Noise level in decibels, is a measure of the relative loudness of an individual aircraft pass-by event. Separate ratings are stated for takeoff, overflight and landing phases, and represent the integrated sum of loudness over the period within which the noise from the aircraft is within 10 dB of the maximum noise (usually at the point of closest approach.) It is defined in Annex 16[1][2] of the ICAO International Convention on Civil Aviation, and in the US Federal Air Regulations Part 36.[3] The scaling is such that the EPNdB rating represents the integrated loudness over a ten second period; EPNdB of 100 dB means that the event has the same integrated loudness as a 100 dB sound lasting ten seconds.

The EPNdB rating of an aircraft is used to estimate how much contribution a given aircraft operation will make to the noise impact of an airport in a community, which is estimated using the day-night average sound level metric.

Detailed information on measurement of aircraft acoustic signature to meet the requirements of Annex 16 is found in ICAO Document 9501[4] and IEC 61265.[5] Data acquisition in one-third-octave bands is required, followed by processing to yield a logarithmically-scaled value in decibels relative to a sound pressure of 20 micropascals, approximately the threshold of hearing.

(20) Noise Data.
The noise levels achieved during type certification in accordance with the applicable noise requirements should be presented, together with associated conditions and with the following note: No determination has been made by the EASA that the noise levels of this aircraft are or should be acceptable or unacceptable for operation at, into or out of any airport. The noise levels achieved during type certification should be included in the AFM and consist of only one take-off, one sideline, and one approach noise level for each aeroplane model (i.e. hardware build). The noise certification standard complied with should accompany the noise level information to indicate the compliance status. Supplementary information (labeled as such) may be added to the AFM concerning noise levels for other configurations or conditions.
https://www.easa.europa.eu/system/files/dfu/CS-25_Amdt%203_19.09.07_Consolidated%20version.pdf